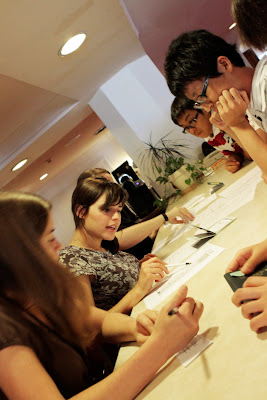 I don’t have someone I want to remember. Because I want to remember all of them. Not just one. I have fun in Oklahoma every day. And know each other from the games, groups, or dinner. I love all of “the VOICE people,” even though my English is not very well in speaking. I don’t know, what can I say when I ate with foreigners. But when I think about that I won’t see them when we go to northern America, I was very sad. In the beginning, I thought one month is very long. But now it’s very short to me. I will miss all the TESOL and the Chief, very, very, very, very much. I will miss Rebecca very much too. There won’t be anyone can teach us how to sing Romanian songs and speak Romanian. So, I have to keep your face in my camera and bring back to Taiwan. 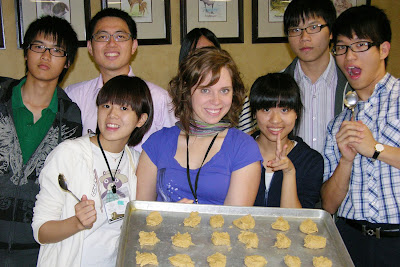 Today we make American cookies in English class. It named Peanut Butter Cookies. I like peanuts, so I am very excited. I have never made cookies. This is my first time to make cookies, so I don’t know how to do. Luckily, my leader is good, although she say she is poor at make cookies. When we are making, there is no water in cookies, so it is hard to make. But when we finish, I taste a little. It taste great! I like it very much. And I enjoy this new experience. 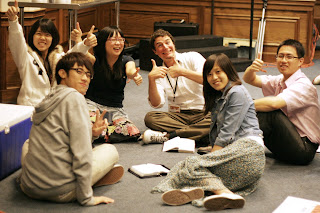 Our life in VOICE starts very early in the morning. Guys have to join physical training at 6:30am, today I joined them too. It was quite fun, but tiring in the same time. At 7:15am we have devotion, we read the Bible in our team, sharing our insights and thoughts. We know God more and more by devotions. After devotions it’s time for breakfast! I love breakfast here, it is so delicious! Then we have morning classes, the lessons of Basic Life Seminar. Much teaching hits my heart and changes my mind. It is after lunch break that begins English class. English classes are so exciting that I am looking forward to them everyday. Then comes the musical rehearsal! First we do many ridiculous movements or make a special kind of sound, depending on Tim’s will during role call. That’s really funny. It’s my delight of the day too. After dinner, we also have exciting activities at night, such as going to park, celebrating American holidays, and shopping. After a busy day, team prayer is a perfect ending for the day. We share our life story, praying for each other. Our life in VOICE is full of fun and spiritual growth. I don’t want to go home after this! 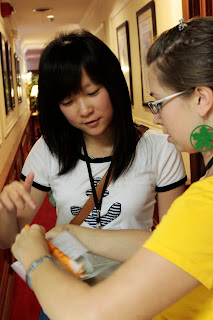 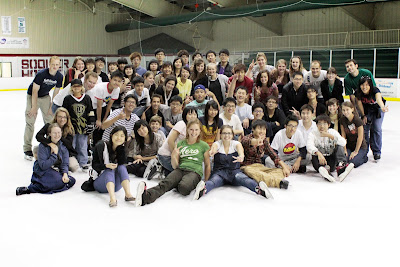 I was nervous about what would happen last week, because we would go to skating rink to skate, and we would celebrate Christmas Eve on Saturday, and we would go to an American family to spend the whole afternoon with them on Sunday. Why was I nervous? Because I was worried that I will fall when I was skating. It’s kind of afraid being hurt. I was also wondering if the person don’t like my present. Of course, it’s hard for me to be unlimited with strangers. But my nervousness were all unnecessary, ice skating was fun, though I am not good at it and felt many times. I still had lots of fun in it. I really loved the food and songs in Christmas Eve, and my favorite Christmas song was Feliz Navidad, it really impress me. That night, I also learned a lesson, “Offer your best thing to God.” On Sunday after we went to church, we were assigned to different families. At first, when I heard that some were going to swim, I was kind of jealous, and the host family I was going to was a minister, so I associated reading Bible as soon as I get the message. And it made me feel upset. But I was wrong again, because we didn’t read Bible at all. Actually, I had a great time with them. The family had seven children, the oldest were 21, and the youngest were less than 10, but no matter how old they all, they all received us with enthusiasm. The led us playing same cards game, such as “Apple to Apple,” “Spoons,” “Bluff.” We had a great time together that time ran so fast; I was really grudged when it was time to leave, though we didn’t known each other for a long time, but they’re just like my family, this it was a also the best event happened this weekend. 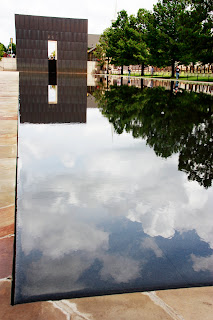 After we visited the museum, I have a very complex mood. Just like sorrowful, horrible, exaggerated, and even have a little angry to the terrorist. When I heard the dead people’s family who cried on the TV, I want to cry too. I also saw many relics of the deceased and a park of the damaging buildings. It’s very realistic. Before we entered the museum, the fence and the 168 field of chairs were shock to me. I feel a little scared. In fact, this bombing is not very long time ago. The pain may still in the heart of Oklahoma City’s people. The important is what a lessen we should learn and what is God want to tell us. Finally, it’s a special experience to me. 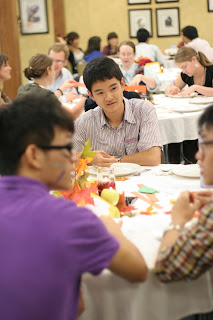 Every morning, we have lessons from Bill Gothard. I learned many things from him. He talked lots about sufferings in our mind. The most impress lesson to me is the lesson which we have today. This morning we talked about it having a conflict to someone. When we have a conflict with others, we should always think about what we did wrong. Is our position polite? Did we go the wrong way? We always think about other’s faults. We seldom think like we might be the wrong one. So I think, if you had a conflict with someone. First, you should review ourselves and find out if there’s anything we did wrong. Second, you should prepare what you’re going to say when you’re apologying. And then, you must make an apology to someone who had a conflict with you. Make an apology genuine and ask that person’s forgive. I hope I will do in this way when some day I have a conflict with someone. 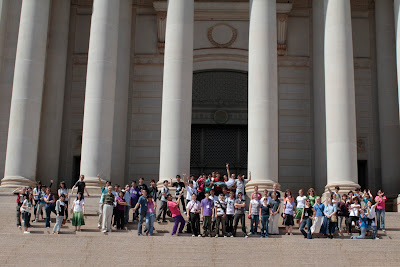 Every morning, after I waking up I go to the team devotion. I think it’s very important and awesome. It’s really nice to start a day by reading the Bible and know what God wants us to learn. My team is reading 1 Samuel recently. Stories in 1 Samuel are quite interesting. I like the verse 9 in chapter 2, and it says “He will guard the feet of His saints, …” It tells us that God is always besides us, protects us, and always guides us to the right ways. So we don’t have to be scared. The words in Bible always remind us what we should do and what we cannot do. Reading the Bible lets us know more about God. I think it’s one of the easy ways to be connected with God. And Samuel really made a good example for us. At the last moment, we always pray together. Thanks God giving a new day, and ask him to help us don’t make the same mistakes that we read in the Bible. I’m happy to have the team devotion every day. It helps me a lot!! 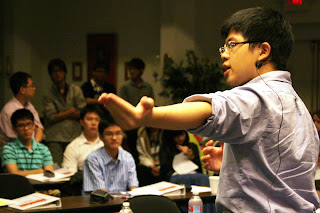 High: I read the Bible together with Team two this morning after PT, and we started from Joshua chapter four. In this chapter, God ask Israelites to set up twelve stones at Gilgal which they had taken out of the Jordan. God had said to the Israelites, “In the future when your descendants ask their fathers, ‘what do these stones mean?’, tell them, ‘Israel crossed the Jordan on dry ground.’ For the Lord your God dried up the Jordan before you until you had crossed over.” I think that the twelve stones plays an important role in Israel’s history. Because human beings, easily forgot what God had done for them. For example, I want to have great progress on my school grade, so I prayed God’s helping hand. However, when I really got my goal, I was not really thank for God’s help. Instead, I thought that I did a good job. So we can keep a diary to remember that God’s grace.

Funny & low: While I was in the elevator from seven floor to the first floor for breakfast, an American girl was in the elevator too. (P.S. I don’t know her name.) When we were arrived at first floor, the door opened. At that moment, an image flashed into my mind, and that was – being a gentleman. As a result, I wanted to push the button “open” and let her go out of the elevator first. And I pushed it, smiling at her. Yet, her face look a little weird. I wondering why she opened her eyes so big, maybe she had not seen so gentle a man before? After she went out, I looked at the button I pushed, and . . . oops. . . oops. . . oops. I could not believe my eyes, and I was crazy embarrassed that I pushed the wrong button. I pushed the button that is “close.” I thought she might want to “wash my face” at that very moment.

Low: After lunch, I went back to my room to take a rest. However, my watch “cut on me,” so I was late for class. As a result, I done twenty push-ups.

“The Prodigal” by Luke Kallberg 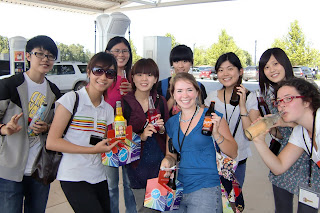 This is my first time to Oklahoma, surely I have lots of fresh tastes here. Besides learning knowledge at Training Center. We went outside for many interesting activities. We had a cool dinner last Friday. We went to Rebecca’s sisters home having Romanian food. It’s a special food that I first time to eat, and we had a good time there. It’s a highlight that we went shopping on the weekend. Besides Target, we went to Penn Square Mall where I bought what I love – what a wonderful time! Of course, on Sunday morning we went to church. This was my first experience in an American church. I felt so curious and fresh that I took several pictures about the locals church. There is one more thing worth saying – we went to Pops! Wow, there are so many kinds of flavors that we can choose. Its cool, I love it!! By the way, I chose the banana flavor! Cool!