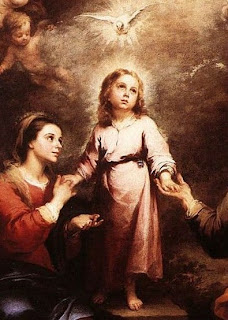 But when he, the Spirit of truth comes, he will guide you into all truth.
John 16:13

Some people look to science for truth. After all, science is just looking at the world and describing what we see. The famous scientist Stephen Hawking wrote a book last year about how he thinks science can now explain where the universe came from – and explain it without God. So is that true? Well, Hawking thinks that if more than one explanation works, we should use whatever explanation is most convenient – both are equally true. I think that this is what happens when we trust science too much: our idea of truth becomes confused. What we think we see when we look at the world today is different from what people thought they saw 100 years ago. It’s even different from what they thought they saw 15 years ago (that was when many scientists began to believe that most of the stuff in the universe is a strange stuff called “Dark Energy.” No one had suggested that before). When the things that are considered scientific “fact” change so fast, who can blame Hawking for thinking that there is no stable truth about the world? No, science is good for doing work, building technology, and such things; but it’s not very good at finding out truth.

But if we can’t find the truth by looking at the world, what hope is there of finding the truth? Well, none. This might be part of what the Bible means when it says we are “lost,” “blind,” and “in darkness.” There is no hope of finding the truth about God, of knowing God. We don’t have the ability to do that. Well, a clarification: we don’t have the ability to do that unless we already know God. So how do we go from not knowing God to knowing God? This is the whole story of Christ: we don’t become God, instead he becomes human. We don’t seek him: he seeks us (Rom. 3:11). We don’t find him: he finds us (Lk. 19:10). This is the ministry of the Holy Spirit: to guide us to the truth that we would never find on our own (Jn. 16:13, above).

What good news! Even the scientists should realize that’s the only way we could ever know the truth.

You believe that there is one God? You do well. The demons also believe, and tremble. – James 2:19

I’m just finishing a college class in philosophy of religion. Our professor guided us through many of the philosophical arguments for and against the existence of God, and in our last class, we talked about a more basic question. How much does all of this matter? Do we need a logical proof of God’s existence in order to believe in God?

A philosophical position that has grown more popular is the idea that our belief in God is justified not by logical proof, but by religious experience – in the same way everyone’s belief in the world around us is justified by experience. The only difference is that while everyone experiences the world around us, only some people have religious experiences (like sensing God’s presence, conversing with God in prayer, etc.). This explains why everyone believes in the world, but only some people believe in God.

If there were a logical proof of God’s existence that no one could reject, what kind of belief in God would it lead to? Everyone would have to say, “Yes, God exists.” But does that mean everyone would become religious believers? Of course not. There is an important difference between believing a fact about God, and believing in God as a person. If there were a proof that no one could ignore, then everyone would believe that fact: “God exists.” But other facts, such as the evil and suffering in the world, could still cause that person to distance themselves from God.

I, on the other hand, don’t respond in that way because I have a different kind of belief: I trust God, I believe God. This is not a kind of belief that can be inspired by logical arguments. It is a product of my relationship with a person whom I know: God. So even when terrible things happen, I remain committed to God because I believe I know Him, and He’s not the kind of person who will let those things happen for no good reason. I trust Him.

There is no person that we could be thanking for these kinds of things…except God. No human, or even group of humans, could really take responsibility for these things and say, “You have that because of me.” Thankfulness is a quality that requires two people. Without God in the picture, all we have is a kind of happy feeling that says, “Man, I love the fact that I have this!” Without God, Thanksgiving Day is just Warm Fuzzies Day.

I recently read God Is Not Great by Christopher Hitchens, a well-known atheist in America. He talks about places in life where we seem, coincidentally, to have exactly what we need. Many people have claimed that this shows God’s goodness in giving us what we need. But Hitchens claims just the opposite: that it shows there is no God because we get what we need without him.

This perspective would eliminate most of what we talk about at the Thanksgiving holiday. If someone decides to give me a bowl of soup, it makes sense for me to thank them. But if a coin is flipped and without anyone’s good will I am given the soup, where can my gratitude be directed? To the coin? There is no place for thankfulness in that case.

But of course we are thankful for the kinds of things mentioned above. As we celebrate this holiday, realize what a significant statement you are making by simply declaring what you’re thankful for. You are declaring that God is real-– and living like it.

I recently participated in an online debate with an atheist. It’s rather long, but you can read it here if you wish. It was a profitable experience and when I have time, I would like to do it again.

I used to think of “debates” as unfriendly and unproductive, kind of like a war where neither side is going to win. But this time, I did the debate not for the purpose of convincing someone I was right, but for the purposes of learning to communicate better, and building relationships. I used to think that debates would destroy relationships, but I found out that is not true. Bad debates destroy relationships; but good debates build relationships. Neither I nor the other guy were able to convince each other of anything in the debate, but I found some areas where I need to learn to talk more clearly, and I also gained new familiarity and respect for atheists as people.

In America, we’re noticing that people who disagree with each other are having more and more difficulty talking with each other about the thing they disagree on. People have less and less desire to talk honestly with others who disagree with them. People are less and less convincible. This is terrible. In the introduction to his book, The Reason for God, Tim Keller, Pastor of Redeemer Presbyterian Church in New York City, puts it this way:

Those who believe in God and Christianity are out to “impose their beliefs on the rest of us” and “turn back the clock” to a less enlightened time. Those who don’t believe are “enemies of truth” and “purveyors of relativism and permissiveness.” We don’t reason with the other side; we only denounce.

We need to talk with people who disagree with us, be willing to learn from them, and be nice about it.